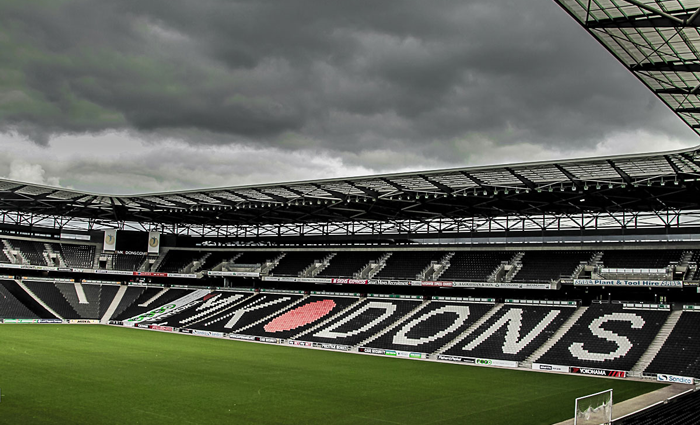 Synapsys scores a first for football

Synapsys, the leader in developing and supplying innovative BMS communication interfaces, has scored a goal with the installation of what’s thought to be the UK’s first automated control system for under soil heating at one of the country’s most prestigious sports venues.

The system is part of an intelligent, integrated approach to energy management and control designed for the award-winning £80m, 30,000 capacity Stadium MK, home to football club MK Dons and chosen as a host venue for the Rugby World Cup in 2015. The new system uses the Synapsys SIP interface technology for predictive and accurate automated control of the under soil heating system via a clever on-line link to a world weather forecasting system, that not only helps halve energy bills but also paid for itself within just one season’s use.

Under pitch heating (UPH) systems are widely used in larger sports venues, ensuring that play can continue in the cold weather on a frost-free pitch, pleasing fans and ensuring the associated business continuity and revenue streams at the stadium and within the local economy. UPH is a notoriously demanding user of energy, typically costing an average of £1,500 per game as well as a strong element of human guesswork to decide when, if and for how long the heating needs to be switched on.

But at Milton Keynes, thanks to the clever Synapsys SIP technology, the element of human guesswork in controlling the heat delivered via 27 kilometres of under-pitch pipework has been removed. The Synapsys solution links the SIP weather interface to the leading Trend building management system, providing accurate advance notice of weather and temperature forecasts via an api key. The BMS then uses the minimum temperature readings provided by the SIP weather interface to determine when to activate the UPH and the level of energy required.

It is the latest controls upgrade in an ongoing programme of works at Stadium MK, which is a pioneering model for new ways to harness available technologies for advanced control, ensuring optimum use of energy and effective management in the built environment. The Synapsys technology is not only used in the UPH but as an integral part of the total solution for the stadium and the integral four star hotel and arena, specified and provided by leading building services specialists, Mitton Mechanical Services.

York-based M&E consultants Watson Wise Associates, in conjunction with Mitton Mechanical Services, designed an innovative three-in-one building control and heating system including the Trend BMS. It was supplied and engineered by Mitton Environmental Solutions, together with modules from the Synapsys range of SIP interfaces which fully integrate with Trend.

The solution uses the full Trend IQ3 network in a system that has a modular gas fired condensing boiler plant providing energy for the under pitch heating, hot water for the hotel and its future extension and heating as part of an air conditioning system for the arena. The system’s design offered a capital cost approximately 30 per cent lower than the more conventional approach, largely due to the combination of the latest in boiler and controls technologies including the interfaces from Synapsys.

System control is remote, largely managed by Ian Barraclough’s team at Mitton, although accessible to a limited of authorised users thanks to the Synapys SIP simple web-based configuration that also means no software licenses or remote servers.

“We looked at a different way of designing not only a different under pitch heating system but also one that could optimise capital expenditure and provide hot water and heating systems for the hotel and arena. Key to that is the control necessary at times of simultaneous energy demands and the Synapsys interfaces help us to achieve that in a simple and straightforward way”.

We looked at a different way of designing not only a different under pitch heating system but also one that could optimise capital expenditure and provide hot water and heating systems for the hotel and arena. Key to that is the control necessary at times of simultaneous energy demands and the Synapsys interfaces help us to achieve that in a simple and straightforward way.
Rob Wise
Senior partner at Watson Wise Associates
Providing accurate
weather & temperature
data to the BMS, removing the human guesswork
Synapsys Solutions SIP weather interface
Case Study
Download PDF